My home state of Maryland regularly earns a high ranking in the American Council for an Energy-Efficient Economy’s (ACEEE) scorecard of policies, and rightly so. For more than a decade we’ve had one of the premiere state energy efficiency resource standards: The EmPOWER Maryland program. Maryland is now one of 26 states with such policies requiring a certain percentage of energy to be saved through smarter energy use in buildings. While they differ in form, their substance is consistent: They are strong performance management tools, establishing targets to guide and drive utilities and agencies to deliver energy efficiency measures to buildings that waste electricity. But as we’ve learned in Maryland, these standards are flawed and incomplete unless they drive energy efficiency performance for low-income communities too. 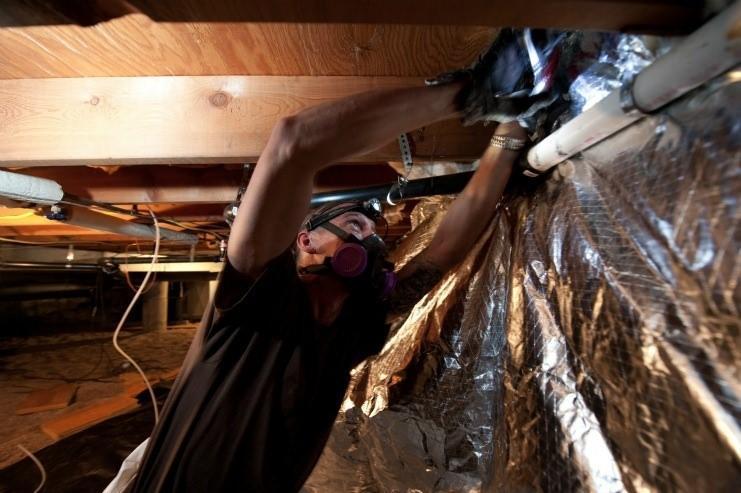 A worker insulates a home in Colorado thanks to the federal Weatherization Assistance Program. Source: DOE

To be clear: For many buildings they work very, very well. Take EmPOWER. Enacted in 2008, it set a performance target of 15 percent in electricity savings by 2015. Utilities achieved that target and our state raked in huge benefits. A 2017 American Council for an Energy-Efficiency Economy analysis tallied up the EMPOWER benefits: Lifetime energy savings of more than 51 million megawatt hours, equal to the electricity used by more than 850,000 people over 5 years, with $4 billion in savings in total customer bills over the life of the improvements. The program is also a pillar in Maryland’s fight against climate change, having cut almost 19 million metric tons of carbon dioxide pollution as of 2015 while also making homes healthier and safer.

In the wake of all these benefits, this legislature wisely strengthened and renewed EmPOWER in 2017, extending it to 2023 and accelerating the pace of Maryland’s energy efficiency by ramping up to a 2-percent-per-year electricity savings target. Driven by this legislation, electric utilities are again delivering.

Some boats are sinking

But while EmPOWER is a proven boon to businesses and upper- and middle-class Marylanders, the program is not equitable or fair to low-income communities. It has a gaping hole: There is no complementary performance target for low-income energy efficiency programs run by Maryland’s Department of Housing and Community Development, or DHCD. Consequently, every year the electricity savings from the low-income energy efficiency programs managed by the DHCD averages less than a tenth of what the rest of the state receives. This is unjust and must be fixed now.

No other state has set an energy savings performance target specifically for the low-income communities. Maryland can show the nation how it’s done—and why it’s important. Thankfully, Delegate Lorig Charkoudian and Senator Brian Feldman have introduced legislation (House Bill 0379/ Senate Bill 0462) in the current Maryland legislative session to require the state to provide funding to place Maryland on a path to achieve 1 percent energy consumption savings by 2026 for low-income households.

This is desperately overdue. Right now, those people who face the greatest threats to their lives and livelihoods due to energy cost burdens from high monthly electricity bills—low-income Marylanders—benefit the least from EmPOWER. For more than a decade, EmPOWER has lifted an increasing number of boats in the state. But low-income Marylanders are sinking—and sinking fast.

Many people are hurt by this huge policy mistake. Maryland’s Office of People’s Counsel commissioned a study in 2018 that found that more than one-fifth of Maryland’s population, or 450,000 households, qualify as low-income. While the majority live in the Baltimore and Washington metropolitan areas, at least one-fourth of households in the more rural Eastern Shore and Western counties are low-income. In other words, energy costs burden low-income Marylanders in both urban and rural areas of our state.

Underperformance of low-income energy efficiency programs deprives these households of relief they desperately need. In fact, the report shows Maryland’s low-income households carry energy burdens more than twice what’s considered a high burden, losing 13 percent of their budget to energy costs. And very low-income ones are crushed by a 42 percent burden on average. That means almost one-half of their income is used just to keep the lights on. And these numbers are from before the historic pandemic and economic crash further undermined health and livelihoods, especially in these households.

Meanwhile, EmPOWER legislation devoid of a performance target for low-income programs means it would take more than a century to serve all of Maryland’s current low-income households with energy-saving programs.

We can do this

The simple truth is that if utilities have a performance target, so should the most important programs in the EmPOWER portfolio. And Maryland is particularly well-positioned to speed up the pace of improving of energy efficiency of these homes. DHCD is the agency responsible for this work, with multiple programs and tools for delivering needed efficiency upgrade services, from insulation and hot water improvements to window and lighting retrofits.

In fact, DHCD as low-income program administrator gives Maryland a leg up over other states, where utilities manage these programs. DHCD’s mission is explicit about helping low-income households, especially renters. In fact, as ACEEE noted in an assessment of DHCD’s programs a few years ago, the agency is in an elite position among program administrators: “LIEEP and MEEHA [DHCD’s main low-income energy efficiency programs] are among a very small number of programs across the nation that tie incentives for comprehensive energy efficiency upgrades with requirements for keeping rents affordable for those with low incomes.”

Performance targets get results. EmPOWER underscores that with its delivery of billions of dollars in benefits for Marylanders racked up for more than a decade. By contrast, there is no energy efficiency goal driving energy improvements in the low-income homes most in need of energy savings.

The bottom line? 2021 must be the year that Maryland repairs this injustice by enacting commonsense performance targets in House Bill 0379 and Senate Bill 0462, so that Maryland finally delivers energy efficiency for all.