Laying it all out: How low income communities can win with the Clean Power Plan

A hidden gem in the Obama administration’s Clean Power Plan (CPP) is the potential to benefit low-income communities. However, residents and advocates of these communities - often the hardest hit by dirty power - need to be ready in order to realize these benefits.

In September, I gave an overview of how the CPP could provide benefits to low income communities by boosting energy efficiency investments in affordable housing. I also included a link to a primer produced by Energy Efficiency for All, on how housing groups can engage in the CPP process. Since then, our affordable housing and community partners have let us know they want more clarity on how to advocate most effectively in the states.

As states explore options and engage stakeholders ahead of the September 2016 deadline for an initial submission to EPA, advocates need to be able to offer real solutions for capitalizing on the potential benefits for low income communities. Key issues still being considered in many states include:

As my colleague, Dylan Sullivan, Staff Scientist at NRDC notes in an earlier post: “In mass-based plans, the state creates a permit - called an allowance - for each ton of carbon pollution that power plants will be allowed to emit in the coming year. It then distributes these allowances. At the end of the year, power plant owners must submit to the state the number of allowances equal to their carbon dioxide emissions. For example, if a power plant emitted 500 tons of CO2 that year, its owner must give the state 500 allowances.”

So, first: Advocates should argue for mass-based plans that include existing and new sources. This creates the right incentives in the electric market and gives a state freedom to allocate allowances without worrying about “leakage”. Emissions leakage could occur if CPP regulations only apply to existing sources of carbon pollution while allowing states to build “new” generation capacity that would not be counted as part of a state’s emissions target. Recent modeling by M.J. Bradley & Associates found that, “CO2 emissions would increase with an “Existing Only” mass target versus an “Existing plus New” mass target or “Dual Rate” program, both of which would be presumptively approvable to address leakage”.

Once that decision is made, the next question, how to distribute allowances - which represent a permit to pollute and thus have an economic value to Electric Generating Units (EGUs) or power plants – becomes an important step in incentivizing energy efficiency in affordable housing. EGUs would be happy if states simply gave them allowances at no cost based on their historical amount of emissions. This scenario would be a windfall to generators and utilities. Giving away allowances based on historic emissions rewards the dirtiest generators and penalizes cleaner ones since more pollution means more allowances received for free.

As advocates for low income communities and affordable housing seek to influence state compliance plans, we should all agree to a baseline advocacy position that allowances must not be given away to coal fired generators based on historic emissions. We should capture the economic value of those emissions permits for public good, including:

If we are to avoid scenarios in which EGUs capture all the economic value of allowances for themselves, we need to be clear on what options exist to ensure that benefits go to consumers, low income consumers particularly. With that question in mind, NRDC created the following infographic to explain the various possible allowance allocation scenarios and it will be the basis for the strategy I advocate below, ranked left to right from best to worst. 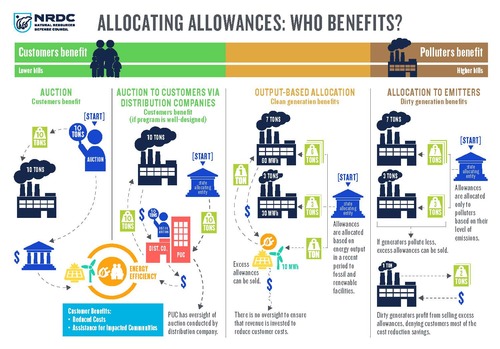 The first best option for distributing allowances is through direct auctions. Under this method, the full value of the allowances is recaptured and distributed to the best uses as determined by policymakers and the public. California’s AB32 legislation is the best known example of this approach operating at the state level.

The legislation is part of California’s economy-wide cap-and-trade program, which requires the state’s largest emitters to acquire a shrinking pool of permits (allowances) for every ton of pollution they emit. This puts a price on pollution to help level the playing field for clean energy. It also puts a hard limit on pollution to ensure California achieves its targets of reducing carbon emissions 40 percent below 1990 levels by 2030 and 80 percent below 1990 levels by 2050. Proceeds from the auctions must be invested in programs to reduce pollution.

Last year in California, allowances sold out just above the price floor at $12.29 and over all the auction has generated more than $3.5 billion that by law must finance investments in emission reduction projects, particularly in California’s communities hardest hit by air pollution.

Another example, the Regional Greenhouse Gas Initiative (RGGI), a regional carbon trading body of nine Northeast-Mid-Atlantic states is an example of how multiple states can come together to increase the scale of the trading mechanism and widen the benefits produced by placing a price on carbon.

As my colleague Jackson Morris; Director of NRDC’s, Eastern Energy, Energy & Transportation Program points out in a recent post, RGGI has produced many tangible benefits to the regional economy and environmental quality including;

“All this while cutting climate-warming carbon pollution from its fleet of power plants by 40 percent below 2005 levels,” Jackson said.

But I know what you’re thinking; West Virginia, Pennsylvania and Missouri aren’t California. The Southeast won’t look to the Northeast/Mid-Atlantic for leadership in establishing a regional trading initiative.

If auctioning is not possible - maybe you can’t pass necessary legislation - there are other options for ensuring customers get the value of allowances.

The second best option for allocating allowances is granting them to Electric Distribution Companies (EDCs), who then sell them to EGUs. Electric distribution companies can use the revenue from an auction - with oversight from their regulators and state Public Utility Commissions - to benefit customers. However, if your state’s utilities are vertically integrated, meaning the same company controls generation/transmission/distribution of electricity, this type of allowance distribution may not work because the seller and buyer of the allowances are the same company.

Fortunately there is a third option that in some cases could be thought of as the best case for driving low income efficiency because it rewards electric savings output directly. This, “output-based allocation” rewards allowances to all generators of energy savings, including any verifiable energy efficiency providers, based on MWh output of energy produced (through renewable generation) or energy savings. For example, it’s possible under this scenario that if a city, public housing authority or housing finance agency – or even individual property owners – were to implement energy efficiency programs in their portfolio of properties, they would be eligible to receive allowances from the state for contributing to that state meeting its compliance target. Those allowances would have a dollar value attached that could then be sold to EGUs that are required to purchase them to cover their emissions. The benefits to low income households would come through lower utility bills due to energy efficiency savings.

Let’s recap: First advocates need to establish a baseline position that states must include new plants under their mass caps and states must not be allowed to give away allowances to EGUs based on historic emissions. If we can agree to that point, there are three potential options for capturing the value of these allowances for public benefit:

Based on the local context and regulatory structure in your state, any of these three options will enable advocates to promote real investments in low income communities through CPP compliance. The coming eight months will see furious activity and horse trading over how to position each state’s compliance strategy. The method of allocating allowances will be at the top of that agenda and provides a great opportunity to generate positive outcomes for our communities.

Next, I’ll address the question of why affordable housing groups and low income advocates should care about whether “new plus existing” sources of emissions are covered in state compliance plans.